An exhibition on individual forms of remembering and commemoration

The digital society takes up traditional practices of mourning and remembrance and adds new possibilities. Digital technologies and the vast amount of digital material such as photographs, texts, videos, and sound recordings enable mourners to deal with memories creatively. It is relatively easy to create memorial films from images and voice messages of the deceased, or to design and print photo books using algorithms and layout templates. These possibilities help mourners to find ways from mourning to remembrance.

Lorenz Widmaier contributed five positions of digital forms of commemoration to the exhibition MEMENTO at the Museum of Sepulchral Culture. The contributions are insights into the research about the meaning of digital legacies for mourning and remembrance.

On this page you will find the link to the 360° online exhibition and can directly explore the five contributions to digital commemoration. Read more about the exhibition on the website of Museum of Sepulchral Culture.

Many thanks to everybody who supported the exhibition! 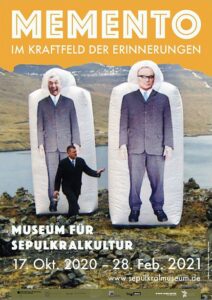 British artist Andrew Kötting takes two 4-meter-high inflatable figures depicting his deceased father and grandfather on a trip around the world, visiting places that were important to his family.

Interview with Taylor Jones about the project “Dear Photograph”, which is being shown as part of the exhibition MEMENTO.

“Dear Photograph”, is a participatory memory project started by Taylor Jones. The idea is simple: take an old photograph depicting friends or family members, go to the place depicted on the photograph, hold the photo in front of the original background and rephotograph the photo and the place. Many internet users followed this call and submitted a photo, always accompanied by a text beginning with “Dear Photograph”.

The photographs chosen for the exhibition recall a personal loss and connect yesterday with today and the analogue with the digital.

The questions were asked by Lorenz Widmaier.

Nachrichten an den Sohn
(messages to the son)

“Nachrichten an den Sohn” (messages to the son) is shown as part of the exhibition MEMENTO.

Silke D. lost her eighteen-year-old son in a car accident. She continued the exchange with her son via WhatsApp for some time after he passed away. Afraid of losing her digital memories, she printed screenshots of the WhatsApp conversation and keeps them in a pocket album.

WhatsApp has become an important remembrance medium for the bereaved, as it allows them to re-experience their everyday life with the deceased. Brief texts, smileys, photos, voice messages, and videos are meaningful and vivid memories that would not exist without digital media.

From the research project of Lorenz Widmaier, who is investigating the meaning of digital legacies for mourning and remembrance. 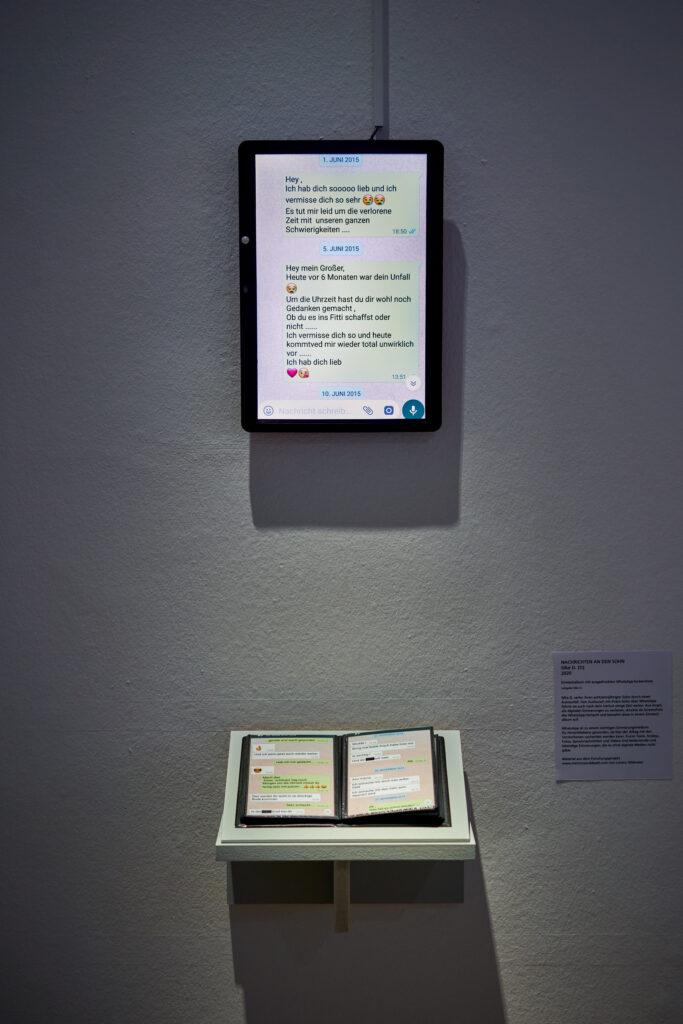 In Memoriam to Francesca Feldmann

“I made this film in memory of my beloved daughter. Peacefully and completely unexpectedly, Franci was taken out of her and our lives on 19 August 2015. May this film remind her friends around the world of the moments they shared with Francesca. I hope that it will also allow me to better cope with my grief and the pain it causes”. Rolf Feldmann

Rolf Feldmann first designed the exhibited book, which shows his own memories of his daughter, but also those from her (digital) legacy: photos, texts, letters, or Facebook posts. Based on this book, he edited a film which he published on YouTube. He says: “For me, the internet has become something of which I say, okay, when I’ m gone too, there’s still something left for eternity.”

From the research project of Lorenz Widmaier, who is investigating the meaning of digital legacies for mourning and remembrance. 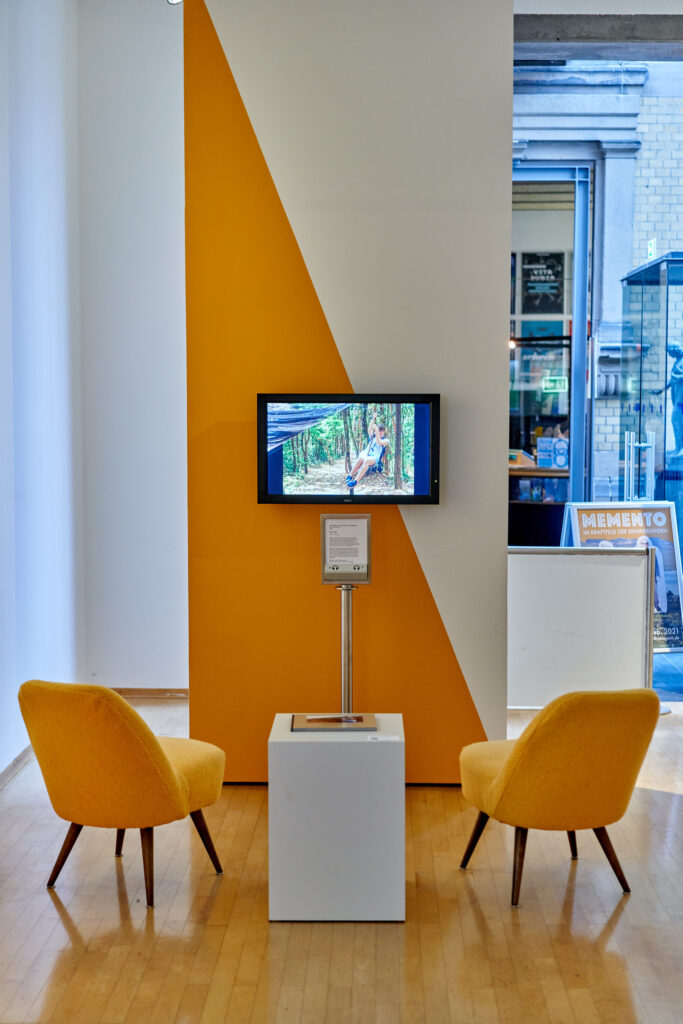 “Ghosts on Google Maps” is part of the exhibition MEMENTO.

Leslie Yajaira from North Carolina found her grandfather, who passed away in January 2020, via Google Maps by visiting online the house where he lived. She posted a video on Twitter documenting this search. The tweet received 432,700 likes by August. In response, others tweeted videos and photos of their deceased they found on Google Maps. The video work brings together nine of these tweets.

The growing amount of data worldwide is not as sober as their data centres, but is interwoven with stories and memories that often remain hidden in order to be re-discovered. The easy retrieval of the data, detached from time and place, poses new questions about privacy and explains the ghostly appearance of the deceased in the videos.

The video was created by Lorenz Widmaier, who researches the meaning of digital legacies for mourning and remembrance. 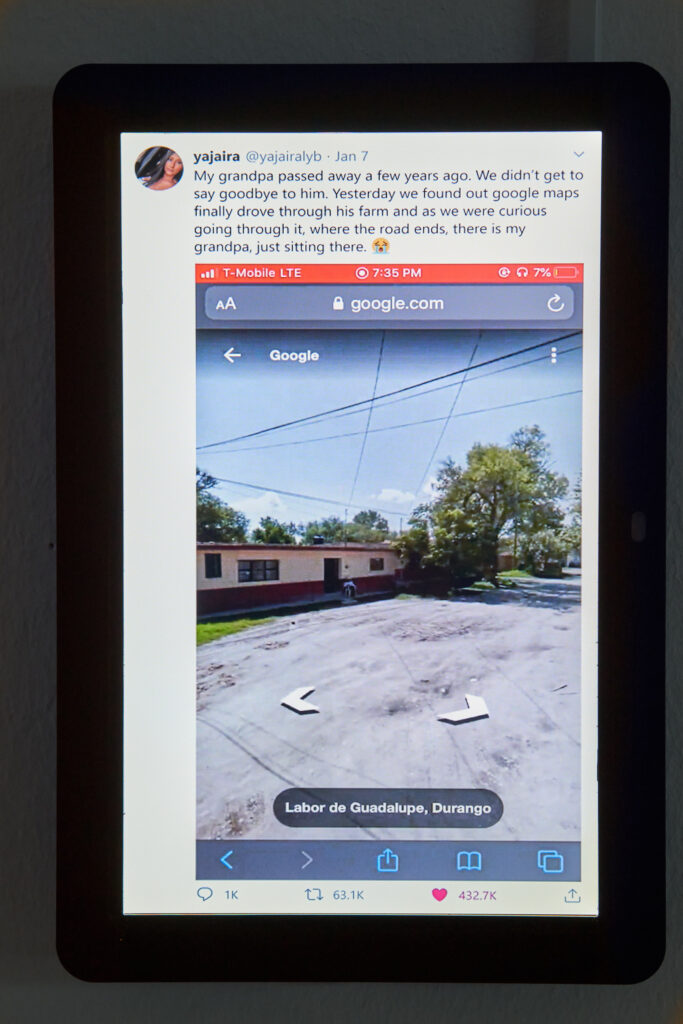 The booklet “My digital legacy” is distributed during the exhibition. With this booklet you can make arrangements for your own digital legacies. You can write down login details and note what should happen to your digital legacies after your death. 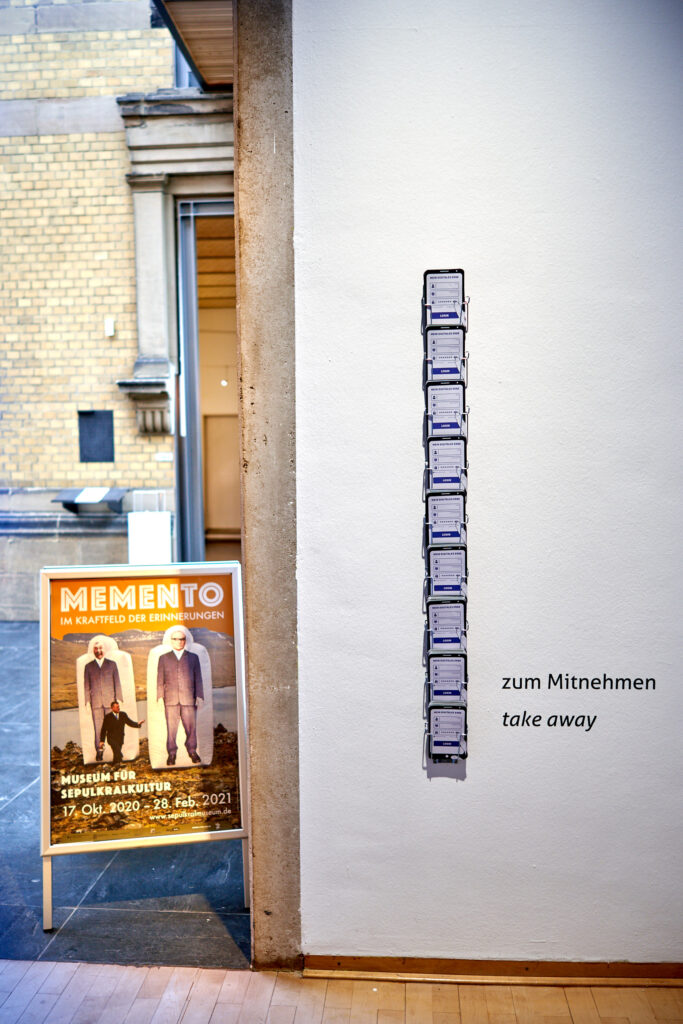 See all works at the 360° online exhibition

Impressions of the exhibition opening